We have prepared a collection of 25 photos and ideas to decorate the front door. We found it very appropriate to bring you these ideas since the door is the calling card of our house. Although later inside we have nothing more than a couple of decorative elements in honor of this party, having the door decorated will be enough. They are also simple decorations, with objects that we can easily find or even make ourselves. So if you like to add a terrifying touch to your house for Halloween, these ideas to decorate the door are going to enchant you. Let’s see them.

On a black door, cardboard eyes have been placed imitating peeping monsters, on each side of the door some pretty pumpkins and a large black cloth as a canopy are the main elements of this decoration. A skeleton hanging on the door, bats, pumpkins, a ghost, and cobwebs, nothing is missing and all this is very easy to get very cheap. This door has a much simpler decoration but has that perfect Halloween touch. A crown plus a couple of black fabrics is sufficient. Ghosts, black branches, small white pumpkins, and a few bats all well arranged and placed add a terrifyingly beautiful touch to this door. This other door has a simpler but very elaborate decoration. A large Garland made with fabrics and a wreath also with fabrics honors this party. A wreath with a very seasonal garland decorates this beautiful door. In addition, a few bats attached to give the final touch. Here we can also see that the typical elements for this party have been used, spiders, black fabrics, ghosts, monsters … But the orange tape that covers the door indicating danger is what I really liked the most. In this other door, they have opted for a less terrifying but just as adequate decoration. Not everything has to be ghosts, skulls, and pumpkins. Super original. The door has been decorated as the head of a large green monster. We go back to the classic. Pumpkins, ghosts, and dry branches make up this pretty Halloween decoration. In this other door, they have combined everything, the door is a monster and they have also added the typical pumpkins and dry branches. This other door is beautiful and I do not mean the Halloween decoration but the seasonal leaves that decorate the facade and the canopy. But focusing on the idea of ​​decorating the door for this party, as you can see using the basic and typical such as skeletons, ghosts and pumpkins are enough. Beautiful door decoration in which we see a path made by pumpkins that guide us to a door where we see on each side how two pillars of dry branches preside and in its upper part two light fixtures that perfectly match the skeleton of the door. In this other door, as it is painted orange, it has only been necessary to add a touch of black with a crown to set it up for this date. More elaborate but beautiful decoration and easy to do. Only a garland of seasonal leaves with some pumpkins has been placed at the foot of the door plus a triple crown and then the entire facade has been covered with cobwebs. This red door has been decorated with a cobweb covering the entire door and a crown. Another beautiful door, this time black to which adding just a couple of appropriate decorative elements is more than enough to recreate a very suitable environment. A very simple decoration. Cobwebs and a large spider. Simple and very effective. This other decoration, although it clearly denotes that it is prepared for Halloween, is somewhat more cheerful. A lovely large wreath adorns the entire door with pretty yellow flowers and pumpkins. In this other red door, only a luminous garland of pumpkins has been added, a spider web on one side and some pumpkins on the floor and the result is fantastic. 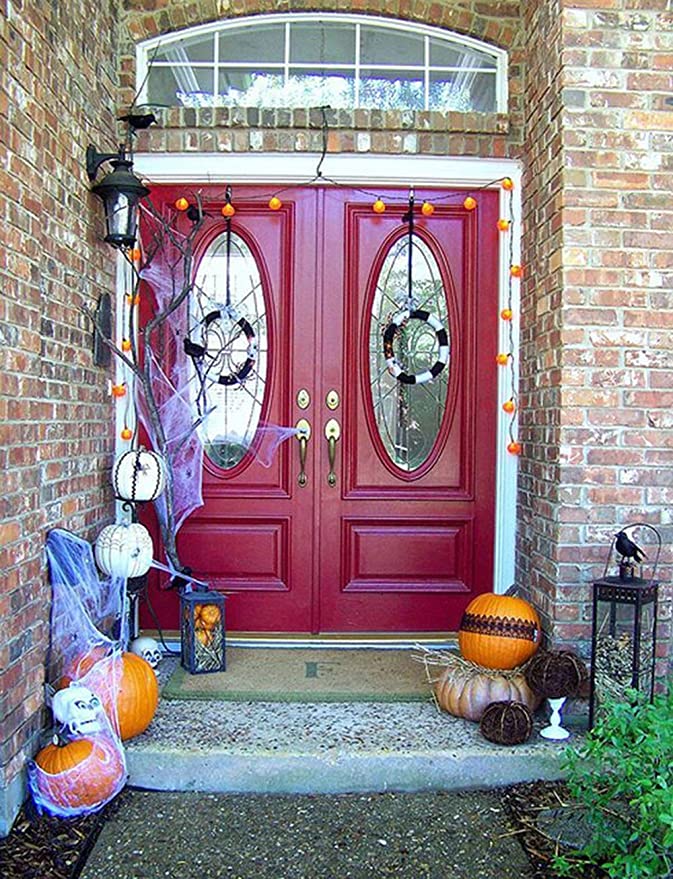 In this other door, there is no lack of detail. They have recreated a beautiful setting. Another decoration based on typical elements.

This other door has only been enough to put some bats made of cardboard and a large cobweb covering the entire door. Very original this other decoration besides simple. The police cordon tape is the great protagonist. 25 Ways to Decorate the Door for Halloween 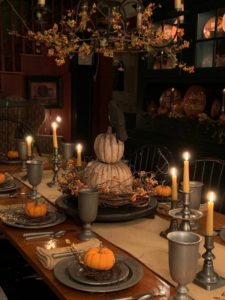