Samsung’s brand-new galaxy watch 5 and watch 5 pros are two impressive watches with fairly fundamental differences. Still, when you’re looking to buy these watches, you might wonder whether to upgrade to the watch 5 pro or save up to $170 for a nearly identical galaxy watch 5.

On the surface, there appear to be a lot of differences, but when you dig deeper, the differences are a little bit different than you might anticipate. In this post, I want to explore the differences between these and concentrate especially on the functionality, the appearance, and my experience after using these watches for a couple of weeks.

So starting with the appearance, you’ll see that these two look very different, and I own a 40-millimeter Galaxy Watch 5. The Watch 5 Pro is only available in a 45-millimeter size, so that will be the first difference.

The watch 5 regular comes in 40 millimeters and 44 millimeters. As I previously mentioned, I chose the smaller size because I wanted to have one here. I also think the smaller model is attractive, but the 44-millimeter model is quite attractive. It’s important to remember that even though the body is one millimeter smaller than the watch 5 pro’s, the display is the same size, so you won’t have to sacrifice that.

The watch 5 pro kind of does a better job of hiding that by having a physical thing their kind of a little bit of a raised bezel that hides that black ring that you would otherwise see on the watch 5 regulars. The only visual difference will be that technically the bezel on the watch 5 Pro is going to be larger, but that difference won’t affect how it looks.

In terms of appearance, that might be a slight advantage, but I prefer the look of the Galaxy Watch 5. It has a more understated, sleek look, and I love how the aluminum rails on either side keep it from looking too much like a fancy watch. As I previously mentioned, it’s unfortunate that the Watch 5 Pro is only available in a 45-millimeter size.

So anyone with a smaller wrist is a little bit out of luck there. As for me, I would say that my wrist size is fairly average, and this feels very comfortable for me. It also feels like the right size, and with the infinitely adjustable band, I think many people would be happy with this. However, this would look very large if you have very small wrists.

The Watch 5 comes in graphite and silver in both sizes; you can choose gold for the 40-millimeter or sapphire for the 44-millimeters. As for the Watch 5 Pro only comes in black or grey, and it has a chunkier appearance due to the larger battery it houses.

Both have digital bezels rather than rotating ones, which is more of aesthetic consideration. However, I believe it works better on the Galaxy Watch 5 Pro as it moves into functionality.You have something to reference your finger on because there is a raised bezel so you can slide your finger around, and it works well. This is sort of a subtle thing that I noticed.

The raised bezel does more than just that. It is meant to protect this, something that some people might overlook and say, “I don’t need the raised bezel; the watch 5’s fine.” As you’re going to be kind of a subtle thing, but when you’re using it, it is a clear advantage for the watch 5 pro.

Well, my Galaxy Watch 5 is already damaged. The chances of damaging the display are slightly lower because there is nothing between the edge and the display (other than a quarter inch of black), so you can damage that. Instead, you’re more likely to scrape the edge, as I did, which could damage the waterproofing, but other than that, the damage is mainly going to be cosmetic.

Considering that the galaxy watch 5 pro has a titanium body, it should be a little more durable on the outside. The raised bezel prevents any chipping from occurring on the glass, in contrast to the watch 5, where you are just going directly onto the glass, and there is a small amount of soft aluminum nearby that can scratch very easily.

As I mentioned earlier, the display sizes for the 44-millimeter Watch 5 and the 45-millimeter Watch 5 Pro are identical, so you’re getting the same resolution and pixel count; everything’s the same. They both have a sapphire crystal display, but the pro is a more durable version rated for up to 29 gigapascals, while the regular is only 24. Realistically, both are durable, but scratching can happen, as I said.

For example, the galaxy Watch 5 doesn’t have great battery life. The battery is significantly bigger on the watch 5 Pro, and from my experience, just comparing the smaller watch 5 to the watch 5 pro, the battery life is not quite double, but it’s very close to double. I was easily getting an extra day and a half versus the watch 5.

In my opinion, if you go for a four-mile run with a GPS on and play music through Bluetooth earbuds, such as downloaded Spotify songs, you can easily drain 25 or 30 percent of your battery in about 30 to 35 minutes.

The watch 5 pro, on the other hand, can easily last two days when used heavily, but more likely three and a half to even four days if you’re even using this a little bit lighter. However, if you do this every day and then go about your normal day, you’ll have to charge this every night.

They both share the same processor, health sensors, user interface, storage, and RAM, which is interesting because I expected Samsung to give you more storage or something extra, given that the pro model is called a pro and might have an additional health sensor. Instead, they gave you nothing extra, which is great for the regular Watch 5, but they have some software differences that are also being released here.

So these feel like genuinely upcoming updates; in a few months, they might give the Watch 5 this feature; nothing is stopping it from doing so.

There is a trackback feature and a route loading feature so you can take a gpx file, such as a hiking or trail biking route, and put this on the watch, and it’ll give you turn-by-turn directions; at the end, if you’re lost, or you know you made a wrong turn while adventuring, you can say trackback, and it’ll take you back to where you started. This is a nice feature on the watch 5 pro that you don’t have on

Consequently, if you download the commute app, for instance, you can download droughts here, and you can do essentially the same thing on the Galaxy Watch 5, as well as most other Android watches available today.

When you consider everything you get with the watch 5—the same sensors, the same processor, the same speed, the same storage, the same ram—basically everything is the same except for durability, battery life, and the ability to load gpx files—it’s a pretty good deal. At the very least, it costs 140 dollars less than the watch 5.

Although it may be tempting to advise getting the watch 5 pro if you’re doing extreme activities instead of the watch 5, this isn’t always the case. You can do trail biking and other off-road activities with the watch 5, but the battery life may be your limiting factor in these situations.

If your wrist is close to a lot of hard objects, for example, if you’re rock climbing or if you ever maybe fall off your bike, those are situations where the watch 5 pros would pull through, and it’s tempting to say if you want the gpx thing then maybe get the watch 5 pros, but realistically the apps out there are. 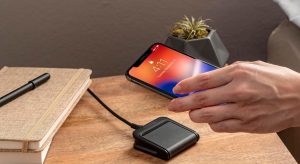 Top 6 Gadgets That Give You Superpowers