Mostly nature is responsible for creating some of the largest objects on earth.

There are some larger objects which are made by human beings. This post is about the 8 largest structures made by humans.

The Great Wall Of China Around the 7th century, BC small walls were built to protect parts of China’s empires from raids and invasions. They began connecting them and by the time passes, the wall grew to be the largest wall in the world. It also mentioned as the only object visible from space.

The first idea for building a large dam across the Yangtze River was discussed in 1919. As it means of producing a staggering amount of energy due to the strength of the river but due to years of war government turmoil and flooding in the area the idea was shelved for decades. Finally, in 1994 construction began on what would become the largest dam in the world and one of the largest objects ever created by humans. It is with 18 million square feet of floor. It has the distinction of being the world’s largest building when measured by floor space. It is located in the Tianfu new area of Chengdu China. This building has a shopping mall, theater, water park, hotel, Church, ice-skating, and a nearly endless list of interesting things. It has the record of the largest indoor swimming pool with a 54 thousand square foot. While you will be thinking of height and weight as factors to determine the largest man-made objects on earth it’s crucial to also think about the opposite. It is located near Salt Lake City Utah. It produces more than 19 million tons of copper which are more than any mine in history. A huge construction Hall was created in a spot outside of
Berlin. It became the largest building on earth by volume as well as the single largest hauled without supporting pillars. It also the biggest indoor rainforest in the world. In order to understand things at the smallest microscopic level, we need something huge to help us out. It was built in hopes of helping scientists.

It has many distinctions such as -:

This building is built underground, near the Swiss-French border. The circular tunnel is 16.5 miles long and 12 feet wide.

The Great Mosque of Mecca It’s estimated that work began on the first component of the Great Mosque of Mecca in 2130 BC. Century by century,
leader by leader, the building was expanded and improved. It is currently being the largest mosque in the world and the second largest building by volume. It is the tallest building in the world. The height of the building is 2,722 ft. It is located in Dubai. This project costs 1.5 billion dollars.

It holds a staggering amount of records such as -: 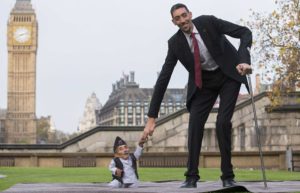